I was contacted by Jordanna Sanderson in May 2020. Jordanna is one of the co-founders of Shot in the Dark Ltd, along with her husband Grant, and together they self-published the quiz game Shot in the Dark.  They asked me via Instagram (https://www.instagram.com/shotinthedarkgameuk/) if I would be interested in trying out their game and the timing was perfect. Please bear in mind, and in the interests of full disclosure, that I was sent a review copy of the game.

I have a very large games collection (1,000+ games), including many trivia games (20+), so although  I’ve only played Shot in the Dark a few times that was sufficient for me to form my opinions. In fact, everyone who played the game immediately said they would love to play it again. 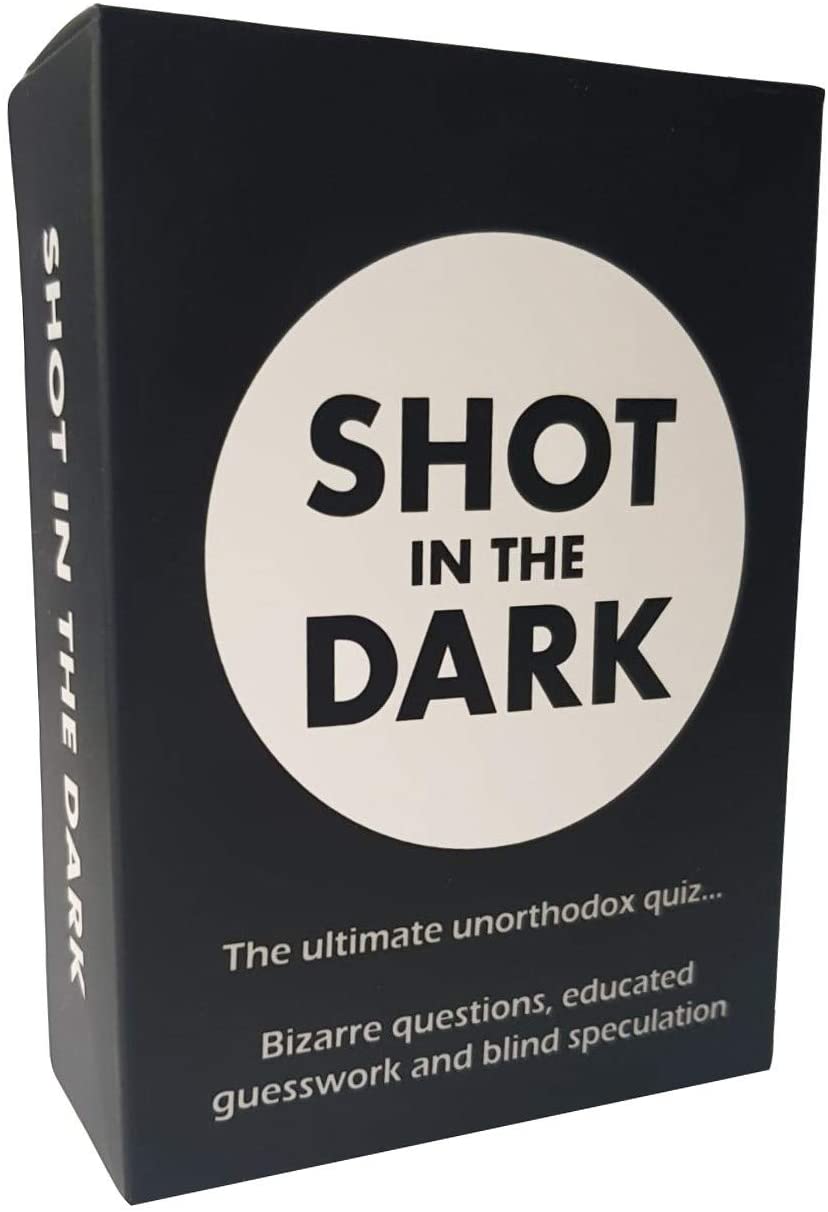 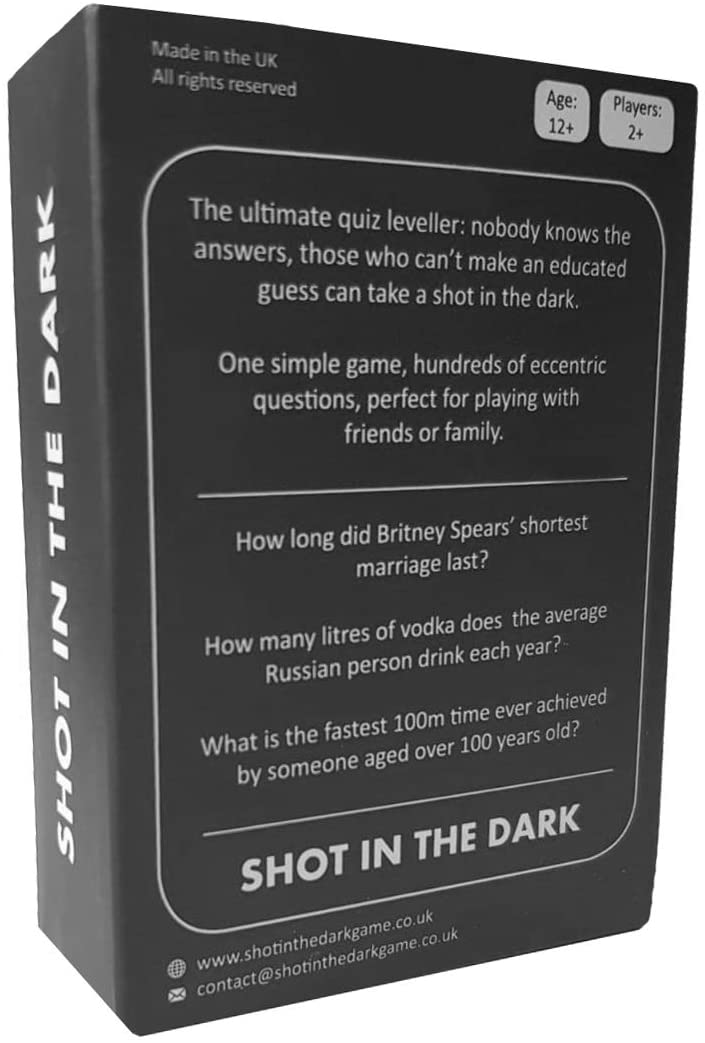 The game is for 2+ players aged 12 and above. I think the more the merrier and would say any child could easily join in as part of a team.  Likewise anyone aged 70+ could also play along.

This is one of those games where you can play until you have had enough. In our first play with 7 teams we set a limit of 90 minutes with the team having the most points at the end of the time being declared the winners.

The game is lightweight and very easy to teach and play. The game has a very small footprint – it can be played on a small table with players just needing a pen and paper.

The components are basically a pack of cards in a box. The card stock could possibly be improved but there’s no need to sleeve the cards as each card will only be used a few times and there is no requirement to shuffle them.  Likewise the box is pretty standard, but the cards do fit nicely in the box although they wouldn’t fit if sleeved.

During the lockdown period my family has a WhatsApp group and play quizzes, via Zoom, several times a week. The problem is that it takes time to prepare a good trivia quiz and most general knowledge quizzes are won by the cleverest players / teams. Not so with Shot in the Dark. Setup takes just a few minutes and that was because I was using Zoom.

Zoom Setup: First of all I logged into my Zoom room using my iPad as the meeting host. Then I logged in to the meeting using my iPhone as a guest named Sand Timer. I put my iPhone into a PIVO holder and pointed the iPhone video recorder at the sand timer although any alternative method is fine. I checked that all participants in the quiz could view the sand timer which lasted for one minute. 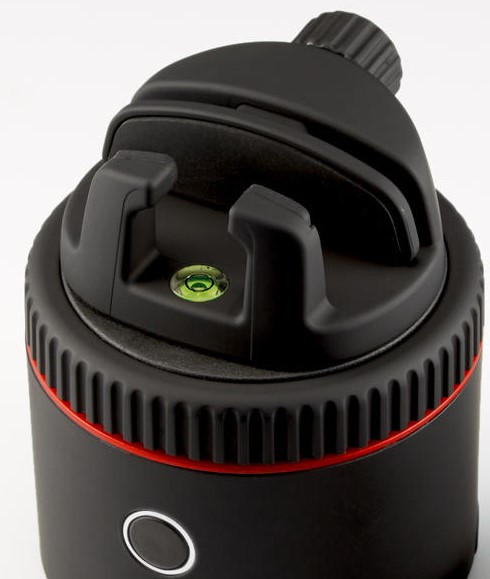 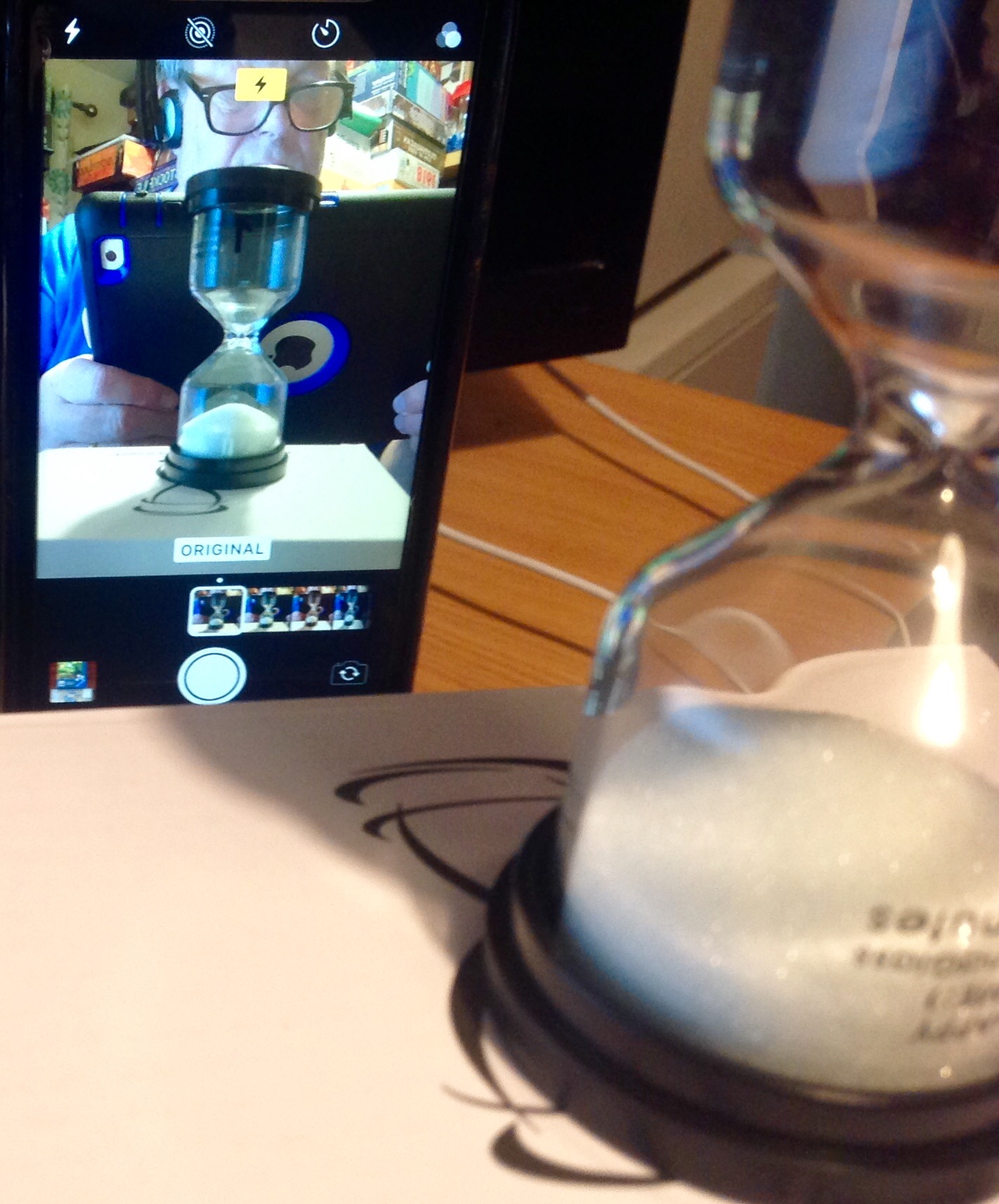 The questionmaster reads out a question from one of the cards and each team is  given 1 minute to discuss and then write down their answers. The teams were encouraged to keep an eye on the sand timer and to mute their microphones. After a few questions, the timer was largely irrelevant as everyone came up with an answer well within the time limit.

Then the questionmaster asks each team for their answer and writes the answers down on a piece of paper. In subsequent questions the order that teams were asked was varied as it is felt that the team answering last has an advantage. This is a moot point as the answers were written down by the teams, but I suppose teams could cheat if they had that mindset.

The game ended after the agreed time limit of 90 minutes.

Shot in the Dark is now my favourite, go to, trivia game. It’s so easy to play and very quick to set up.  One of my other trivia games is Wits and Wagers . (In fact I uploaded a file to Board Game Geek of some UK/worldwide centred questions. The file has been downloaded 1,400 times!) If you own both games, then a high percentage of the questions can be used in both games – they both use the same sort of random knowledge-based questions so essentially you are getting two games for the price of one!

Shot in the Dark is full of wonderful ‘laugh out loud’ moments as players naturally interact and discuss the answers.

All players are involved in the game all the time – there is virtually no downtime which is quite unusual in a game. The sheer variety of cards ensure that no two games are the same. It’s worth mentioning that there isn’t a dominant strategy in the game.

My only negative is that some of the questions need clarification. For example, “How many Big Macs are sold per year?” As everyone is guessing the answer, I don’t suppose it really matters if this is in the UK or the entire world, but players did want the question clarifying.

To finish I thought I’d include a few quotes from some of the people who played.

“Really enjoyed it. Great for people of all intellects. My personal favourite was the sand timer.”

“Thanks for the game. Was enjoyable and lots of fun. My constructive criticism is that it needs to be a bit more specific on some questions.”

“Got the old grey matter working. Some questions a bit ‘wishy’ (?) and some answers questionable.”

“Brilliant quiz and had a good laugh.”

There are no comments yet

Why not be the first